The power of the social graph

There are many things I hate about Facebook’s Photos application:

Flickr doesn’t have any of these problems. But flickr lacks one thing that makes Facebook’s Photos truly compelling: the social graph. People tagging is the basis of an incredibly powerful distribution and recirculation engine.

When I added the people tags, each of the people I tagged received a message that there was a new picture of them online. Who wouldn’t want to log in to see what kind of potentially embarrassing pictures might be up there? When they logged in to view the pictures, some of them also left comments. Which triggered a message to me saying people left comments. And then I logged in to see the comments. 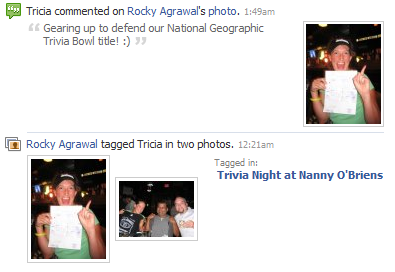 You can also tag people who aren’t on Facebook by providing their email address. Yet another way for Facebook to grow their user base.

People who weren’t in the pictures — my friends or friends of people I tagged — saw messages in their news feeds, furthering the distribution.

In less than 24 hours, the pictures received four comments. The same pictures on flickr didn’t receive any.

Rakesh Agrawal is Senior Director of product at Amazon (Audible). Previously, he launched local and mobile products for Microsoft and AOL. He tweets at @rakeshlobster.
View all posts by Rakesh Agrawal →
This entry was posted in facebook, flickr, marketing, photography, web 2, web 2.0. Bookmark the permalink.

11 Responses to The power of the social graph