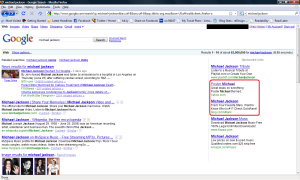 Seen over the weekend: ads for bing and Yahoo! on Google search results for “Michael Jackson”.

The bing ad appeared every time I reloaded the page. The other ads were much less frequent.

Update: AOL has joined the fray with ads for AOL Music, including a pitch to download a “Michael Jackson tribute toolbar” on the landing page.

Rakesh Agrawal is Senior Director of product at Amazon (Audible). Previously, he launched local and mobile products for Microsoft and AOL. He tweets at @rakeshlobster.
View all posts by Rakesh Agrawal →
This entry was posted in advertising, aol, bing, google, search, yahoo. Bookmark the permalink.