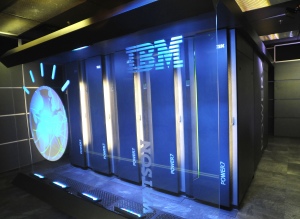 Jeopardy! contestants Ken Jennings and Brad Rutter got a spanking the likes of which they’ve never seen by Watson, an IBM supercomputer, last night.

How would Watson do against that other font of knowledge — Google? Watson is optimized to understand human language, which can be full of ambiguity, wordplay, sarcasm and puns. Google makes some accommodations for language, but keywords do the heavy lifting.

Google did both much better than I expected and about as well as I expected. It did much better in the sense that I expected Watson to runaway from Google as much as it ran away from Jennings and Rutter. It did as well as I expected in that before I entered each clue into Google, I predicted how well Google would do. For example, I knew the Beatles lyrics category would be a piece of cake for Google. Those predictions were generally correct.

Google and Watson tended to struggle on the same clues. Both had trouble on Final Frontiers, Alternate Meanings and The Art of the Steal categories.

The only clue that Watson got wrong and Google nailed was “The first modern crossword puzzle is published & Oreo cookies are introduced” in the category Name The Decade. Google’s answer was found on this page that provides explanations of the New York Times crossword. If Watson could have heard Jennings’ incorrect answer of “1920s,” his backup answer of “1910s” would have been correct.

As for Final Jeopardy!, neither Watson or Google got it right.

The clue in U.S. Cities was “Its largest airport is named for a World War II hero; its second largest, for a World War II battle.” Watson hesitantly answered Toronto. Google’s best guess would’ve been Arizona. Even geographically challenged Americans would know that neither answer fit the parameters of the category. (I hope.)

Oddly, that’s a relatively easy clue for humans. Think of U.S. cities, narrow it to the big ones, narrow that to ones that have multiple airports and then go through the list. Kennedy… Dulles… LAX… SFO… Hobby… Love…

A few thoughts on search from this exercise:

Also see Danny Sullivan’s great analysis of the underlying technologies and the differences between natural language processing and keyword search. 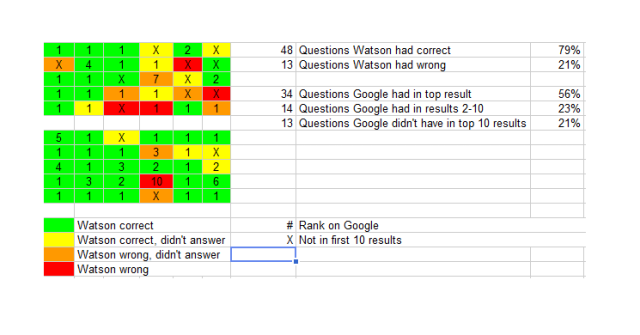 Jeopardy! Watson vs. Google, Game 1 comparison. Each cell represents a question. Grid position maps to the position on the Jeopardy! game board; you can see the clues and responses at the Jeopardy! Archive. The colors indicate Watson's performance; the numbers and "X"s indicate Google's performance. Watson is only given credit for answers in its #1 position. If you give Watson credit for having the answer in any of its 3 positions, it would pick up 6 more questions.

Disclosure: I have several good friends who work at Google and went to high school with co-founder and CEO Larry Page.

Rakesh Agrawal is Senior Director of product at Amazon (Audible). Previously, he launched local and mobile products for Microsoft and AOL. He tweets at @rakeshlobster.
View all posts by Rakesh Agrawal →
This entry was posted in google, search. Bookmark the permalink.

7 Responses to Watson vs. Google