The Daily is a solid effort facing huge challenges

Posted on February 2, 2011 by Rakesh Agrawal

This feature story on prison inmates making toys in The Daily looked promising; it turned out to be only a short video.

Today we saw the unveiling of Rupert Murdoch’s new iPad-based newspaper, The Daily.

It looks very different from apps from the Washington Post, New York Times, Wall Street Journal and USA Today. The impression is distinctly more of a magazine than a newspaper. My first reaction was “It sure is purty.”

While other apps, like the Journal’s and the Post’s, have bizarre navigation modes, navigating The Daily feels very natural. (With the exception of occasional stutters, likely caused by the app’s heavy use of graphics and animation.) Tabs are readily available to flip among sections.

The first issue was clearly designed as a showcase with numerous interactive elements such as user polls, timelines and quizzes. Multimedia elements include extensive use of photos, videos and even a gratuitous 360-degree photo to illustrate a story about Venice sinking into the sea. (Not exactly breaking news there.) A Super Bowl feature included an animation that explains a shovel pass. It would’ve been more useful if it also included a video.

The content is of mixed quality, though much of it is has the quality and depth of Parade Magazine. (Much of it is wire copy.) A feature on inmates in Louisiana making toys for kids with a “only in The Daily” starburst looked promising. It turned out just to be a short video clip.

There are print design conventions that some magazines use, such as two-page spreads. While that can be somewhat excused in shovelware magazines exported from inDesign, it’s hard to justify for a publication specifically designed for a tablet. 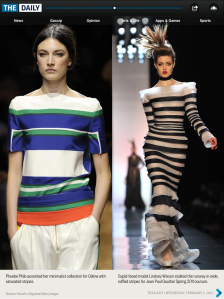 I will never be interested in fashion news. I don't need to see it.

The Daily integrates with social networks, but it is clumsy. A feature on Rihanna has her Tweet stream embedded. Tweeting a story defaults to the oh-so-catchy “Check out this article from The Daily” instead of something that might actually inspire a click. The Facebook equivalent contains some information about the article, but only after generic text and HTML that Facebook doesn’t render.

This animation explains a shovel pass.

Despite its flaws, the bottom line is that The Daily is the best incarnation of an online newspaper I’ve seen. The question is how big is that market?

Estimates are that Murdoch is spending $500,000 a week for The Daily, or an annual budget of $26 million. While that’s tiny compared to traditional publishers, it’s gargantuan compared with funding that tech startups receive. Then there’s the $30 million already spent to get to launch.

Based on the proposed subscription price of $40/year and subtracting Apple’s cut, the venture would need to have about 930,000 subscribers to break even. As a print publication, that would make it the third largest paper in the country, behind the Journal and USA Today. Even if you assume that The Daily could make as much per user on advertising as it does on subscriptions, that’s 465,000 subs to break even. (For comparison, this assumption would also mean that The Daily makes more per user on advertising than the most successful Internet advertising company — Google.)

Those are huge numbers and I’m very skeptical that The Daily can do it.

Rakesh Agrawal is Senior Director of product at Amazon (Audible). Previously, he launched local and mobile products for Microsoft and AOL. He tweets at @rakeshlobster.
View all posts by Rakesh Agrawal →
This entry was posted in apple, ipad, journalism, media, newspapers. Bookmark the permalink.