Netflix throws away the disc in the US

Netflix is edging a step closer to its name with a test of streaming only service in the United States. The new offering allows users to purchase a net-only subscription for $7.99 a month. Adding DVD rentals is an option for an additional $2.00. This represents a $1.00 price increase from recent offers of $8.99 for unlimited streaming and unlimited DVD rentals with 1 DVD out at a time.

The online selection still lags its DVD catalog. That’s unlikely to change in the near future.

Netflix has been de-emphasizing DVDs lately. For good reason: streaming is much cheaper than postage. It costs roughly 5 cents to stream a movie vs. close to $1 per DVD rental. It has put a substantial emphasis on streaming, with Netflix capabilities embedded into dozens of devices, including Apple TV, Google TV, blu-ray players, iPads, iPhones, TVs and game consoles.

The company also recently entered the Canadian market with a CDN$7.99 streaming only plan with no option for DVDs. 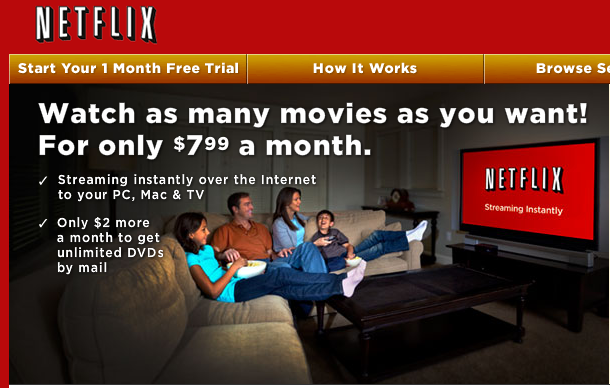 Rakesh Agrawal is Senior Director of product at Amazon (Audible). Previously, he launched local and mobile products for Microsoft and AOL. He tweets at @rakeshlobster.
View all posts by Rakesh Agrawal →
This entry was posted in netflix, television. Bookmark the permalink.

2 Responses to Netflix throws away the disc in the US