Cutting the cord on the home phone 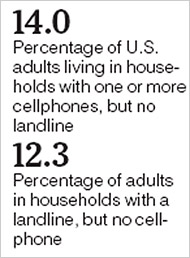 It’s been about four years since I paid a landline phone bill. (And for the previous three years, I only had a landline so my DVR could call for program listings.)

I’d love to know what the landline sign up rate in dorm rooms is these days. With the proliferation of cell phones, I suspect that it won’t be long before it’s not worth the expense of maintaining campus phone networks.

This stat from the University of Virginia provides a little insight:

With free long distance, unlimited nights and weekends on most plans and unlimited in-network calling on many wireless plans, it certainly doesn’t make sense to make long distance calls on a dorm phone.

Rakesh Agrawal is Senior Director of product at Amazon (Audible). Previously, he launched local and mobile products for Microsoft and AOL. He tweets at @rakeshlobster.
View all posts by Rakesh Agrawal →
This entry was posted in statistics, wireless. Bookmark the permalink.

2 Responses to Cutting the cord on the home phone