Through much of its roadshow presentation, Groupon tries to make the claim that it’s a technology company. At one point, CEO Andrew Mason bizarrely uses a cyborg to illustrate how much the company is about technology. From a company perspective, that makes sense: technology companies get much higher valuations than other companies. But investors should think twice. 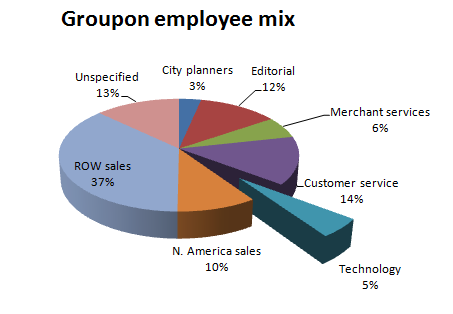 Only about 5% of Groupon employees are in technology.

According to Groupon’s latest S-1, only 5% of Groupon’s more than 10,000 employees are in technology. That ranks below “Unspecified.” The only group within the company that is smaller is city planners, who are responsible for scheduling deals.

To make matters worse, earning additional revenue requires a corresponding increase in employees. The size of departments such as editorial, sales, merchant services and customer service should grow in line with revenue increases. In its third quarter, revenues grew 9.6% and overall headcount grew 8.2%.

Although two of the executives in the roadshow presentation tout their Amazon credentials, comparing Groupon to Amazon is a big insult to Amazon. The latter has invested in core technologies and infrastructure that have become the core of many Internet sites, including EC2 and S3. Although others invented cloud competing, Amazon has done more than anyone else to democratize and popularize it. Amazon invented Kindle and made e-books mainstream. It continues to innovate in supply chain and logistics.

Besides, the core problem in local is not a technology problem: It’s the reluctance of many small businesses to use Internet technologies. That’s a problem hundreds (if not thousands) of companies have wrestled with for 15 years now. Many companies have built self-serve platforms that few businesses used. Groupon’s innovation was to strip away the requirement for the business to use a computer, make Internet advertising less targeted, less efficient and more expensive — expensive enough that it could afford to pay a sales force.

But that’s a bridge at best. Eventually, probably in 3-5 years, businesses will use the Internet more for marketing. Once that problem is solved, real technology companies with massive built in distribution like Google and Facebook will dominate the space.

There are some technology intensive problems in local, such as mapping, routing and imagery. But those are mostly being tackled by Google and Microsoft; other companies (including Groupon) incorporate them in to their own products through APIs.

As further evidence of its technology expertise, Groupon touts its SmartDeals targeting engine.

I’ll believe that they’ve invented a great targeting engine when I stop getting deals for mani-pedis and The Body Shop.

Rakesh Agrawal is Senior Director of product at Amazon (Audible). Previously, he launched local and mobile products for Microsoft and AOL. He tweets at @rakeshlobster.
View all posts by Rakesh Agrawal →
This entry was posted in daily deals, groupon. Bookmark the permalink.

43 Responses to Think Groupon is a technology company? Think again.